The information presented below about the natural environment of Kachemak Bay is excerpted and paraphrased from the Kachemak Bay Research Reserve's site profile and ecological characterization.

The land and waters of Kachemak Bay are shaped by water, ice, and surrounding mountains in a maritime climate characterized by a relatively moderate seasonal range of temperatures, high humidity, and ample rain and snow. The bay and the Pacific Ocean minimize large extremes in the air temperature, resulting in relatively mild winters and cool summers.

Regional circulation in lower Cook Inlet, where Kachemak Bay is located, is strongly influenced by the east to west flow of the Alaska Coastal Current in the Gulf of Alaska. The bay's average depth is 25 fathoms (150 feet). The floor of the bay begins as a shallow, gentle slope along the northern shore and gets steeper and deeper on the southern side. At 96 fathoms (576 feet), the Bay's deepest section is found in a trench in the outer Bay known locally as the Jakolof Trench. 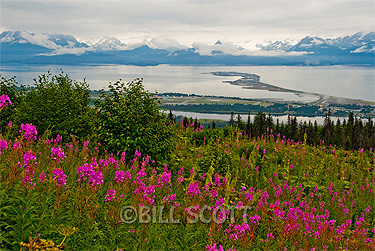 Kachemak Bay is split into inner and outer Bays by the Homer Spit, which extends four miles into the Bay from the northern shoreline, delimiting the inner and outer portions. In general, water flows into Kachemak Bay on the southern side and out of the Bay on the northern side. The inflowing water is more marine while the outflowing water is more estuarine, being more turbid and less saline, due to the outflow of several rivers and streams (primarily Fox River and Sheep Creek at the head of the bay and Grewingk Creek and the Wosnesenski River on the south side of the bay) that terminate in the bay. Water flows between the inner and outer Bays through a narrow opening formed between the Spit and the southern shoreline.

From steep glaciated fjords to smoldering volcanoes, the Kachemak Bay region exhibits the effects of dynamic geologic processes. Tectonism, the active process of plate tectonics that has been ongoing for at least 250 million years, has been a major force in southern Alaska. In southcentral Alaska, where Kachemak Bay is located, the oceanic Pacific plate is moving under the continental North American plate at a rate of about two-inches-per-year. The scenic Kenai Mountains, bordering the southern side of the Bay, and the volcanoes extending along the arc of the western side of Cook Inlet, resulted from this subduction. On a more recent time scale, episodic glaciation has sculpted the surface features of the Bay region for the past 25,000 years. 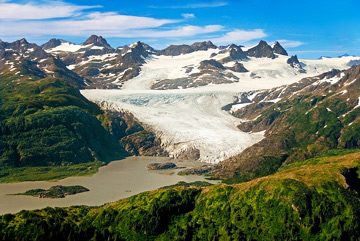 There is a remarkable distinction between the vegetation communities located on the northern and southern sides of the Kachemak Bay Watershed. This dissimilarity is a reflection of differences in geology, climate, soils, and hydrology. The southern side of the Bay is a steep, mountainous, ice field. It is a physiographic province with active glaciers, as well as ice fields with tidewater terminations on the Gulf of Alaska side of the Kenai Peninsula. The northern side, in contrast, is part of an extensive, lowland, physiographic province, with a gentle topographic gradient and no active glaciation.

Kachemak Bay itself occupies a structural trough between these two contrasting physiographic provinces. 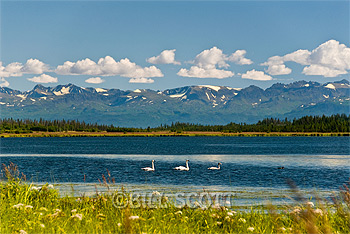 From an aerial view, the vegetation on north side of the bay appears as a mosaic of patches and dendritic branching. Unlike the southern side of the bay, the northern side has not been glaciated for tens of thousands of years. Wetland plant communities are common on the northern side, and are associated with the many depressions, poorly draining slopes, and riparian areas that form the intricate geomorphology. These various formations create the potential for diverse microclimates, and hence, the patchwork of vegetation.

Forests of the northern watershed occur primarily on terraces (relatively level bench or step-like surfaces that break the continuity of a slope). Most of these forest communities contain Lutz spruce, which is a hybrid between white spruce and Sitka spruce. The occurrence of this hybrid is another example of the mixing of maritime and continental climates. Sitka spruce is a coastal species, and white spruce is an interior species. Willow and paper birch are found with the spruce in some locations. Non-forest communities include Sitka alder thickets, bluejoint grass-fireweed communities, and meadows of mixed herbaceous flowers, grasses and sedges. Wetlands are common and include willow-grass communities in riparian areas, and peatland fens in the extensive glacial lakes and drainage ways.

On the southern side of the watershed, plant communities follow an elevation gradient from beach to forest, to subalpine to alpine, except in areas where snow slides regularly occur. Wetland plant communities are not as common as they are on the northern side. In snow slide areas, the vegetation within and alongside the snow chutes is stunted and succession is interrupted. The result is fingers of early succession habitat protruding into wide areas of later succession habitat. 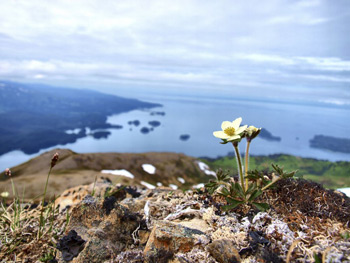 Forest communities on the south side are dominated by Sitka spruce forests that grow between sea level and 2,200 feet in elevation. Forests of black cottonwood occur along riparian corridors, rivers, and creeks, and away from the direct marine influence of the bay. Non-forest plant communities occur in alpine and sub-alpine areas where extreme temperatures, steep slopes, and lack of soil development limit tree growth. Alders dominate the subalpine community and occur in variable associations with birch and willow. The herb layer is diverse with a variety of grasses, wild flowers, ferns, and mosses. 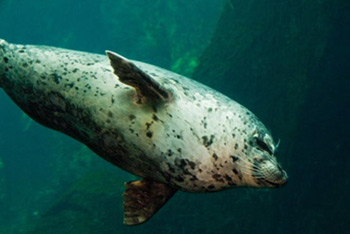 From kelp forests to enormous sand waves, Kachemak Bay contains a diverse underwater landscape. Approximately 125 species of fish, 11 species of marine mammals, and over 400 species of macro invertebrates dwell in the bay's waters, where they feast on a fertile marine buffet. A sizable population of sea otters attests to the invertebrate prey abundance, as otters consume one-third of their body weight daily to meet their metabolic needs. Minke whales, harbor porpoises, Steller's sea lions, and harbor seals also thrive in the bay.

The bay is also Lower Cook Inlet's primary bird wintering habitat because of its relatively ice-free waters and comparatively protected environment. Each spring, hundreds of thousands of migratory shorebirds, sea ducks, and other birds forage and rest in the bay, feeding on abundant invertebrates and new plant growth. The largest seabird colony in the bay is home to eight breeding species: tufted and horned puffins, common murres, pigeon guillemots, glaucous-winged gulls, black-legged kittiwakes, and pelagic and red-faced cormorants. 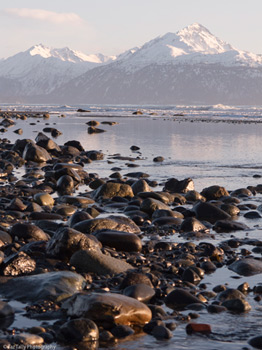 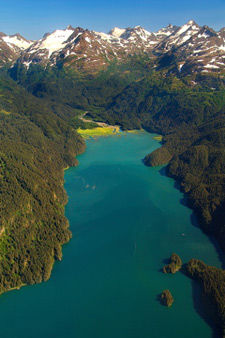 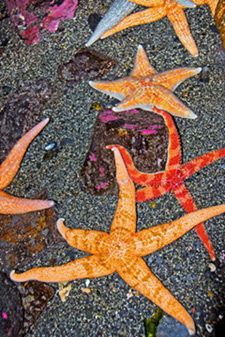 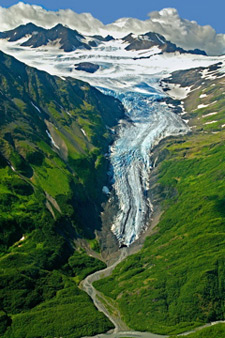