For millennia, Kachemak Bay has attracted and provided sustenance for people. The bay is rich in resources, which arises in part from the varied topography, plant and animal life, geology, and climates of the northern and southern shores. The lives of people living here have always been linked with Kachemak Bay. The oldest sites are at the water's edge. People were living along the shores of Aurora Lagoon 8,250 years ago. 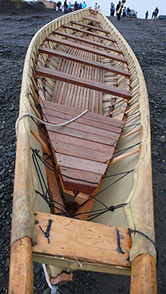 The earliest residents of Kachemak Bay arrived by kayaks or larger umiaks. They settled near the water and traveled upon it. The people harvested edible plants and animals from the intertidal areas; hunted seal, sea otters, porpoise and beluga in nearshore waters; fished in deeper waters; and harvested seabird eggs, chicks, and adults from rookeries on steep-sided islands. Onshore, the people harvested a multitude of plants, caught salmon in fresh water streams, and found temporary shelter in rock niches. They hunted caribou, Dall sheep, bears, marmots, foxes, and birds to eat. They collected slate for knives, ulus, and spear points. They used chert for arrowheads and baked red shale for beads and tiny, carved figurines. They also rounded beach boulders and pebbles for fishing weights.

When the Russians arrived in the late 1700s, they also came by water and sought aquatic riches, especially the pelts of sea otters. They noted schools of herring in Seldovia Bay and coal near the Homer Spit. With the purchase of Alaska by the United States in 1867, Americans trickled northward, crossing the North Pacific by boat from the west coast. The first economies of the American period were coal and gold mining, fishing, agriculture, and fur farming. In the first eight decades of the 20th century, the development of numerous fisheries kept residents focused on the bounty of the bay: herring, halibut, salmon, shrimp, crabs, and clams. 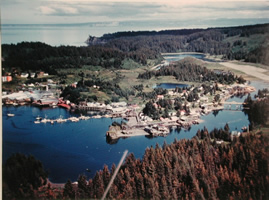 Seldovia, the social, religious, and economic center of Kachemak Bay until the mid-1960s, was water oriented. Homes and businesses lined the waterfront. People traveled on foot or by boat and dined on foods harvested from adjacent beaches, forests, and waters.

Years before it was named in 1896, Homer began as a coal community. Over the decades, it evolved into a fishing and farming community. With the construction of the Sterling Highway in about 1950 and opening of the small boat harbor in 1964, Homer replaced Seldovia as the economic, cultural, and recreational hub of Kachemak Bay.

For further information on the history of Kachemak Bay, visit the Pratt Museum and Homer Society of Natural History:
http://www.prattmuseum.org
and the Alaska Humanities Forum:
https://www.akhf.org/ 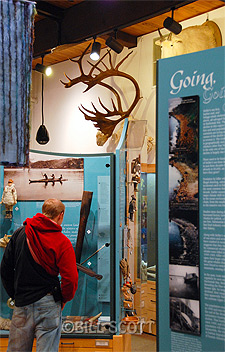 The Pratt Museum and Homer Society of Natural History 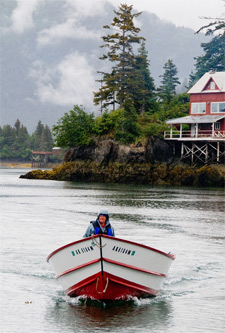 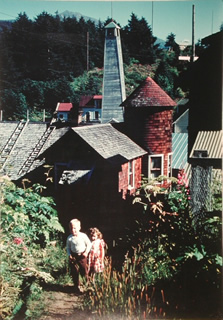